The staff at Steiner Academy Hereford would like to congratulate their Year 11 leavers, 96% of whom have achieved at least a standard pass in English (grade 4 or above), and 76% of whom have 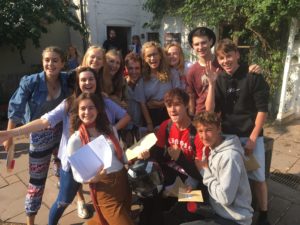 achieved this in both English and maths. Across all subjects, roughly one quarter of all grades achieved were top grades (i.e. grade 7 or above – equivalent to achieving grades A or A* in the previous grading system).  Other data indicates that our students have made very good academic progress during their time with us, and last year we were ranked fifth highest in England according to the Department for Education’s ‘Progress 8’ measure.

“We are one of over a thousand Steiner schools worldwide, whose first priority is to nurture children in a way that seeks to prepare them to live fulfilling, meaningful, emotionally literate and responsible lives. We want them to be able to make a positive contribution to the world.  Our children’s academic success clearly demonstrates that allowing a full experience of childhood with a later start to formal learning and a curriculum rich in art, music, dance, drama and direct experience of the natural world, in no way hinders academic development – quite the opposite!”

The Steiner Academy wishes all of its leavers every success as they move on to local colleges and other destinations.

Steiner School is a collective mark of the Steiner Waldorf School Fellowship.

“The need for imagination, a sense of truth, and a feeling of responsibility. These are the three forces which are the very nerve of education.”
Rudolf Steiner